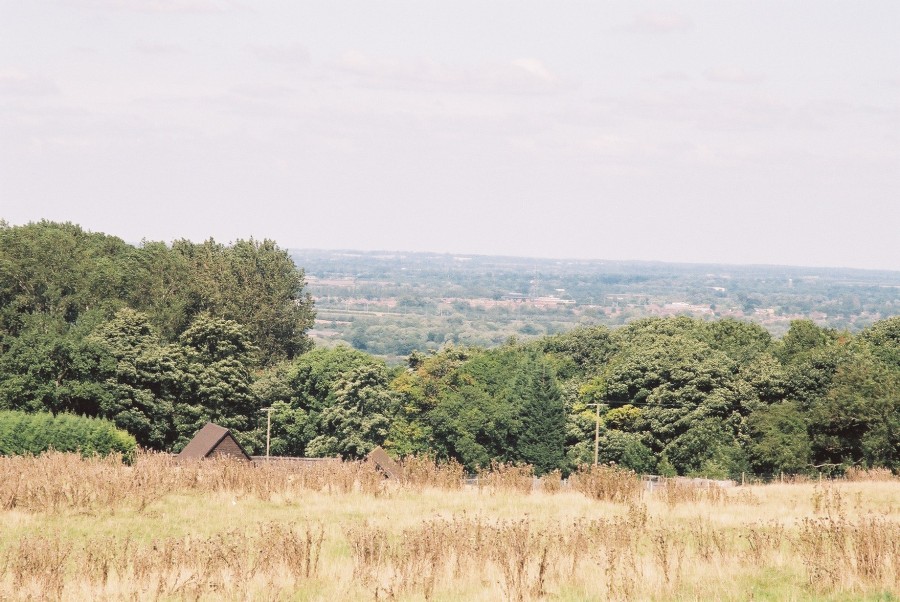 It has been fashionable in conservation debates in recent years to talk of working at a ‘landscape-scale’ as promoted in the Lawton report. Approaches needed include, as in the example below: (a) improving the quality of habitat patches, for example by coppice restoration; (b) making existing sites bigger; (c) enhancing connectivity through a new woodland corridor or (d ) stepping stone patches; (e) creating new woods; reducing pressures on existing patches through (f) establishing scrub-grassland buffers and ecotones, or (g) more general biodiversity enhancement in the surrounding farmland.

Landscape scale is though one of those phrases which, like the term ‘rewilding’, conveys a useful general idea but whose meaning depends a lot on the context in which it is used. So, there are various different ways in which we could look at how the landscape around Wytham works.

We can start with the current physical landscape: the way the wooded hill sits in a big bend in the River Thames, with farmland and roads on all sides. The hill stands up from the floodplain, catching the wind (and any pollution it brings), creating different microclimates on the north and south-facing slopes. It is product of its geology, the remnants of limestone reef overlaying sand and then clay at the bottom.

The current landscape is only the latest incarnation; over the last two hundred years the area of woodland around the hill has generally increased. The farming around the woods has changed dramatically with arable increasing and decreasing according to changes in the markets, subsidies or government policies. Key species have increased or decreased at different times – the crash in rabbit populations in the 1950s, the subsequent rise in the deer population, the creation of beech plantations, the loss of elms and possibly now ash to new diseases. What we have is a legacy of historic landscapes determined by previous human interventions, from the planting of individual trees to the fellings driven by World Wars, as well as by environmental factors.

The landscape can also be looked at as a series of stocks and flows of energy, biomass, water and nutrients, some of which are reasonably well-contained within the Wytham estate, whereas others depend on inputs from and exports to the wider region. Carbon dioxide from elsewhere is currently being sequestered in the woods, as well as being circulated locally; rainfall hitting the hill similarly goes through various local cycles, but ultimately much of it will drain out the bottom and into the Thames.

Our landscape-scale is influenced by our size and visual cues from ground level. That scale may be far too big or far too small for other species. The landscape for some insects is effectively a collection of hollows in a few big oaks; others may move amongst the canopy and rarely come down to ground level. The yellow-bird’s nest seems to have been constrained to just two small areas of beech for at least the last 100 years. Great tits may largely move around within just one part of the Woods, but badgers move out into the surrounding fields. They may be constrained by the roads and river around the estate, but pine martens, if they ever return, would need to range much further.

The human users of the area have their own different landscapes as well. Some researchers work across the woods as a whole, others only in small parts of them, while for some Wytham is only one site of many that their studies encompass. There are other landscapes of our minds: are we viewing the woods as sources of data for a research paper, or the inspiration for a poem or sculpture.

Landscape-scale thinking is a good idea, but we need to look at it across different dimensions in time as well as space.