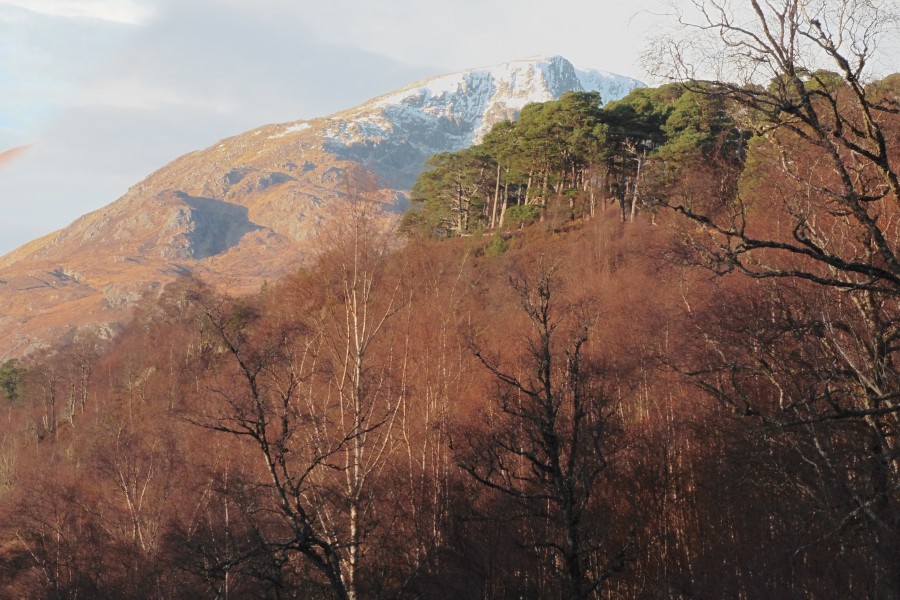 The conservation sector is quite used to the idea that one wood is not necessarily the same as the next; that a site in Kent will be different to one in Gwynedd. We need to remember to apply this principle to how woods change over time as well as space, right back into pre-history. Some sites have gone through various open phases in the past; some open sites were wooded until relatively recently; the current tree composition may be different to what was present a thousand years ago.

About 10,000 years ago the Sydlings Copse area, just east of Oxford, appears to have been mainly open grassland with some Birch, Scots Pine and Willows. Hazel then increased, perhaps forming closed stands, with some Oak and Elm and the contribution of herbs and grasses drops at that time. About 6,800 years ago Alder and Lime started to become more common. Around 5000 years ago the levels of Elm pollen declined. At Sydlings Copse Lime declined alongside the elm, which, with an increase in Hazel and some increase in herb and grass pollen and fern spores, might suggest the landscape became more open again at this time.

The fen at Sydlings Copse close-up and from a distance: the source of the pollen record.

Subsequently both Elm and Lime increased but around 3,800 years ago they and Hazel started to decline again. This was accompanied by an increase in herb and grass pollen, in fern spores and of cereal pollen. There was clearly farming in the area and the contribution of trees to the pollen record declined to very low levels by about 1700 years ago. This suggests that most of the woodland had been cleared from around the fen hollow. From about 1000 yrs ago there was some recovery of Oak and Hazel and these, with Field Maple and Ash, are the main species in the ancient woodland today. From this last period there is also pollen of Dog’s Mercury and Wood Anemone that are still common in the Copse (Day, 1993).

Inside Sydlings Copse today, a mixture of ash, hazel and field maple, plus some open grassy glades.

Some of the same elements are present in the uplands of Wales. At Bryn y Castell, Snowdonia, a post-glacial landscape of grasses with herbs such as Docks or Sorrel and Meadowsweet was gradually replaced by open woodland of Birch, Hazel and Willow from about 8,650 yrs ago (Mighall and Chambers, 1995). The grass and herb component declined as Pine, Oak and Elm increased until about 6,750 yrs ago, after which it still seems to have been a landscape with a lot of tree cover but with increasing amounts of Alder. From about 2,580 yrs ago there are traces of cereal pollen suggesting that people were starting to farm in the area and from then on, the proportion of tree pollen in the record starts to decline. Evidence for Sphagnum, Heather and Bilberry increases, which may represent the development of the largely open landscape of grassland and mires that is found here today and more widely across Wales. The change to more open conditions was probably a combination of human activity, evidenced in the archaeological record, and a shift to a cooler, wetter climate that favoured peat development. 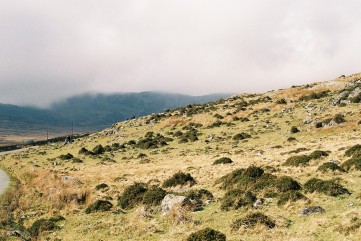 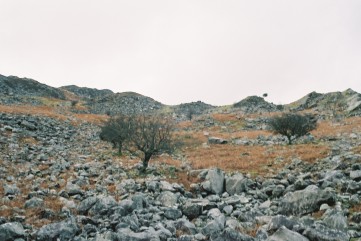 Many open landscapes in Wales once carried extensive woodland and might again if the grazing pressure were reduced.

In the Highlands of Scotland, in East Glen Affric, initial development of Juniper scrub was followed by increasing levels of Birch and Hazel between 10,740 and 8,220 (Froyd and Bennett, 2006). Pine then increased and remained abundant for about the next 6,000 years.

Small peaty hollows at Glen Affric as a source of pollen records; pine and birch forming distinct stands rather than intimate mixtures.

Oak and Alder were also in the area, but probably occupied the more fertile, flatter and wetter areas, as at Talladale today, rather than being intimately mixed through the pine stands. Birch may have been both as separate stands and as part of areas regenerating after windthrow or other factors leading to gaps developing. The broadleaves declined in the pollen record from about 2,200 yrs ago, at the same time as there is more evidence for blanket peat development, but the Pine pollen remained high. However other Pine stands further west in the Glen do not show such a strong continuity of woodland cover.

Just because a pollen sequence contains both lime and alder, or pine and oak, at a time, does not necessarily mean that these trees were growing in intimate mixtures. It would be more likely that the alder was picking out the wetter soils while the lime was on the dryer ground. Pine and oak might grow together but we might expect the oak to have the edge on the more fertile soils and pine on more acid free-draining sites. 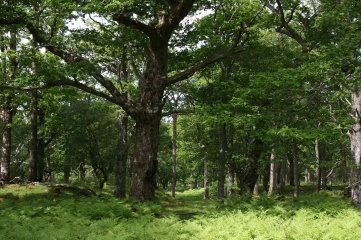 Oak on flat ground by Loch Maree, contrasting with birch and pine higher up the stream.

Given the variation that exists in some of the small ancient woods today, we should expect that there were both local and regional variations in the composition and structure of past landscapes. There is a risk we overlook this when we talk in generalised terms about the wildwood, Caledonian Forest or even past half-open landscapes of oak wood-pasture.