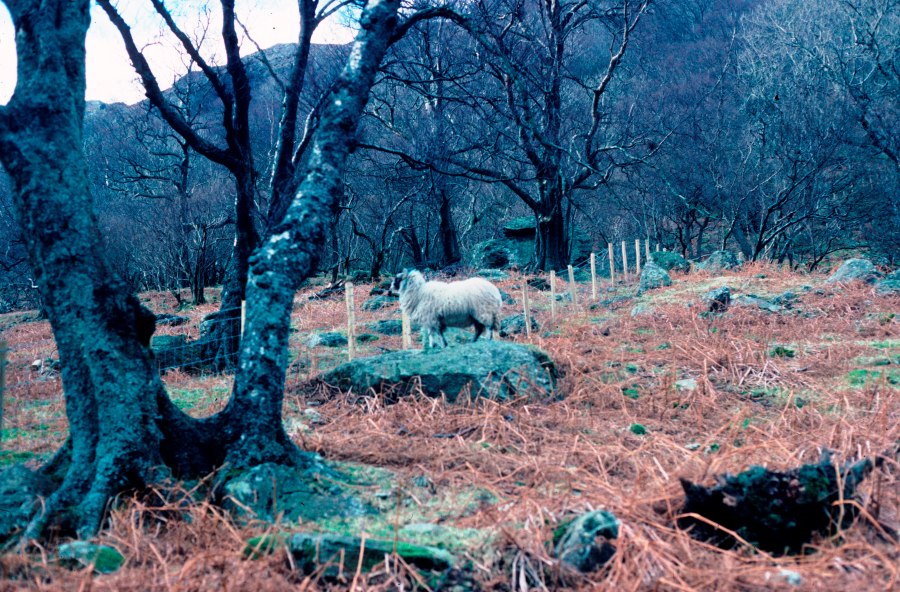 A common reaction when it looks like a wood is being overgrazed, is to put in a fenced exclosure. Marked differences may then develop between the area within the fence and that outside. The exclosures may be maintained, as are those in Roudsea Wood, Cumbria, but with the wood outside still being heavily impacted. In other woods the fences get damaged and gradually collapse. We have a couple in Wytham that need to be refenced at the moment. 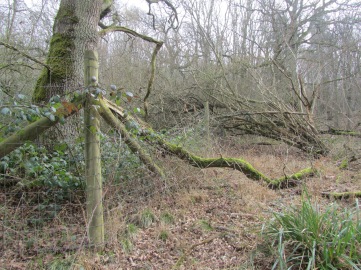 Fenced exclosures renewed and needing to be renewed at Roudsea Wood and Wytham Woods respectively.

In the early 1950s the National Trust were concerned about the lack of regeneration in the woodland at Padley Gorge, Derbyshire (SK253795). An initial suggestion that the whole wood be fenced was turned down because there was uncertainty as to whether it might not instead be the altitude and soils that were limiting regeneration. The wood was also valued as shelter for the sheep flock in bad weather. Instead about a hectare at the northern end was fenced in 1955. Twenty-six years later Donald Pigott looked at what had happened in a classic study of its type (Pigott, 1983).

He found that outside the exclosure there were no signs of regeneration and the field layer was dominated by wavy-hair grass. Inside the grass was taller, but in addition bilberry had greatly increased in both cover and height. Birch seedlings were common in the grazed areas but were regularly grazed off; within the exclosure some had grown up as 1-4m tall saplings. Some sapling oaks were also found inside the fence. That was what we were shown on a visit in 1986. However, what happened thereafter?

I visited the site again in September 2018. Walking up from Grindleford Station the woodland on the western side of the gorge did not look particularly grazed. Instead of close-grazed wavy-hair grass there are signs of regeneration (rowan and oak saplings), much tall bilberry, with other patches dominated by bramble, greater wood-rush and broad buckler fern.

The western side of the gorge, which in 1981 was described as grass-dominated.

The original exclosure area was at the northern end of the wood and the remnants of the old fencing could be found. On three sides this had been replaced by new fencing as part of the wider stock proofing of the wood, hence the wood’s ungrazed appearance. On the eastern side where the exclosure was continuous with the rest of the (now fenced) wood the original fence had just been left to decay.There was now little obvious difference in the vegetation across this old boundary.

The southern edge of the exclosure with new fencing where it adjoins the moor; the eastern edge fence now shows little difference either side of the boundary.

There was still a small area of grazed woodland beyond the stock fence and the bilberry more or less stopped at the fence with grasses more abundant in the grazed section, as described in Pigott’s study.

Contrast between the fenced wood/old exclosure at the northern end and the still-grazed woodland beyond.

The burst of regeneration noted in the exclosure in the 1980s has now grown up to be part of the tree layer. Occasional new saplings were present where there was a canopy gap. The exclosure clearly showed that regeneration was being limited by stock grazing. I have not yet established exactly when the main wood was stock-proofed (I am in touch with the local NT office over this). The O.S. Explorer 1:25,000 map (revised 2013 but the woodland layer may be older) shows only the exclosure as fenced suggesting the work is relatively recent. All that is needed now is perhaps for someone to repeat the 1980s survey.