Apparently, summer is a difficult time of year for badgers, particularly the cubs, because, as the soil dries out they are unlikely to be able to find enough earthworms to eat. I don’t eat earthworms but high summer in the woods is not my favourite season either.

The spring has the glories of the early flowers, the fresh green leaves on the trees, the views and appearance of the wood changing almost by the day. However, by the end of June the celandines have generally gone; wood anemone and wild garlic are more or less over; bluebells are reduced to the pale straw of the seed stalks. There are not so many summer flowering species in woods and those there are tend not to produce mass displays, unless you count bramble. 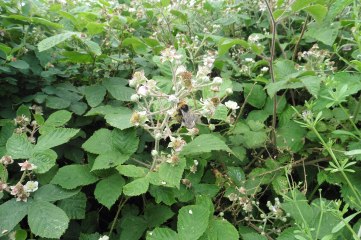 The trees have closed canopy creating a rather humid atmosphere below; leaves on the understorey block off views. Flies, mosquitoes and ticks abound, and in the west coast of Scotland the midge rules. This is the season for peak vegetation growth, which in Wytham means metre-high nettles and two-metre high brambles in places. Grass and nettle pollen adds to my discomfort by triggering hay-fever. Yet, as now, this is often when I end up doing field-work, recording the permanent vegetation plots set up in 1973 by my former supervisor, the late Colyear Dawkins. 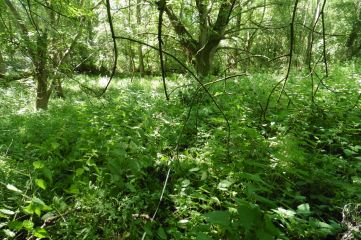 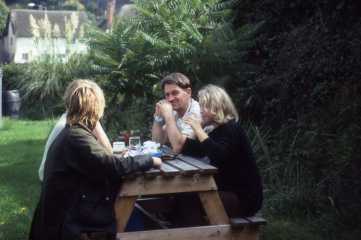 A challenging mixture of nettle and bramble; Colyear relaxing at the White Hart.

Perhaps I should not complain since the results are worth it as we have been able to track the vegetation changes since. It must also have been worse for him and his colleagues when they were setting up the system, because the bramble cover then was two to three times what it is now. They had to hack their way through the woods in order to establish first, grid posts at 100 m intervals and then, 163 plots at every other post. The post positions and the diagonal corners of the plots were marked with underground metal markers such that we should be able to re-find the right points precisely forty-five years on, even if the posts have fallen over and been moved. 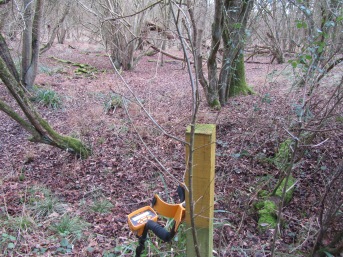 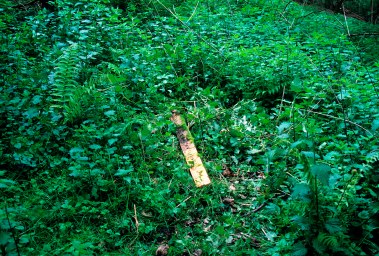 Tall, orange topped posts can sometimes be difficult to find.

That at least is the theory, although you would be surprised how much other metal work is encountered whilst trying to scan for the markers with a metal detector. I have not come across Saxon or Viking hoards yet unfortunately, but have found plenty of brass cartridge bases, horseshoes and odd-shaped bits of iron from old farm machinery.  Even if you know you must be within about half a metre of the marker positions there are false signals to confuse you as the detector catches on a bramble stem or grass tussock. Still I am making progress and hope to have most plots done by the end of August.

Some of the markers are now 5-10 cm below the soil surface, so checking you have not just hit a cartridge case may involve excavation.

Why have we decided to record the plots this year? Unfortunately, Ash Dieback was confirmed in the Woods at the back-end of last summer and the aim is to capture as complete a picture as possible of the state of the site at the start of the outbreak. Other researchers are collecting data to fill key gaps in various animal and environmental baselines. This should enable us in future years to follow the impact of the disease in stands with both high and low levels of ash cover to start with.

I would of course have preferred not to be doing my survey for this reason, but on the other hand the bramble and nettles are probably only going to get worse.  Perhaps by the time that the next recording is due I will have handed the metal detector and machete on to the next generation of ecologists. Meanwhile as I push my way through the thorns I can look forward to autumn, the changing colours and swirling movement of falling leaves, the chance to see further through the woods.

One thought on “This is the season the badger dislikes and so do I! (With apologies to Thomas Hardy)”