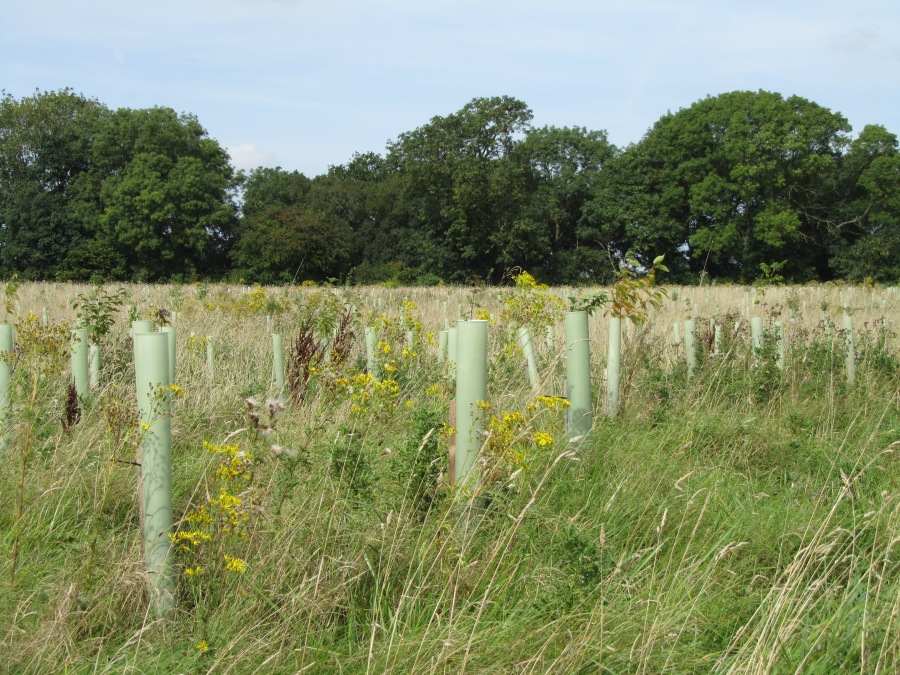 The 1980s were in many ways a turning point for British broadleaved woodland. The ancient woodland inventory project was getting underway; the 1982 the Broadleaves in Britain conference heralded a resurgence of interest in its woodland management; the Woodland Trust started to emerge as a significant player at a national scale in woodland debates. Less welcome were the increasing numbers of reports of deer becoming a significant problem in restocking woods and restoring coppice. There also emerged the first tree shelters, then commonly called Tuley Tubes after Graham Tuley at Forest Research who did the early work on their development (Tuley, 2019).

An experiment with tree shelters in 1982, Forest of Dean.

In the early days there was as much interest in the faster early growth and establishment of oak in particular that might be achieved by these mini-greenhouses, but the protection provided from browsing was also seen as a key benefit (Tuley, 1985). Tubes were a cheaper alternative to fencing for individual tree planting or the creation of small (<1 ha) field corner woods that were being encouraged, by the Countryside Commission (as it was then).

There were problems with voles getting under them and nibbling root collars; weed growth within the tubes; exacerbation of fires in woods once the plastic caught. There were also some complaints that they made planting sites look unsightly, like rows of gravestones. Nevertheless, they were rapidly adopted in various shapes, sizes and colours.

Trees in shelters, being outgrown by the weeds; what some saw as a blots on the landscape

They have been used primarily in amenity plantings but at least some of those trees may eventually be cut for timber – will any long-term effect on the general timber quality be found, or will it be only in the central core?

There was not much discussion early on as to what would happen to the tubes once the trees had properly established, just an assumption they would at some point be removed. While responsible owners might do this in a timely and regular fashion, not all did or do (Lloyd, 2019). Trees breaking out of the tubes became a not uncommon sight. The first steps towards making them more environmentally friendly was to try to make the plastic degradable in sunlight. This led to the tubes breaking up, but only into smaller lumps of plastic. Concerns about such pollution and also the carbon cost of their production has further forced a rethink on tree shelter use.

Current research by Forest Research (part funded by the Scottish Forestry Trust) is exploring whether alternative materials to plastic such as cardboard or wool might be used in their production. The Woodland Trust who had probably been one of the biggest single users of tree shelters have decided not to use single-use plastic shelters in future planting (https://www.woodlandtrust.org.uk/about-us/what-we-do/research-and-evidence/plastic-tree-guards/). We may therefore see a decline in their use overall and more consideration of their fate where they are used.

With hindsight, would it have been better in the 1980s to have promoted other ways of establishing new trees and woods, such as greater deer control when their numbers were still relatively low? Possibly, but this would have been difficult to sell to the public as deer impacts were not widely accepted as a problem in England by many in the conservation sector and for small sites and individual plantings perhaps not worth the effort.

We should also recognise that tree shelters have allowed many thousands of trees to get established that would not otherwise have done. They have been a game-changer – well done Graham! As we again struggle to come up with new ways of expanding England’s tree and woodland cover, our bright ideas of 2020s may similarly be found to have unexpected flaws when we review them in 2060.

New woods and trees developing because of the benefits from tree shelters.