Boar are rootling in the Forest of Dean, Beaver are swimming in the River Otter in Devon. Now another B, for Bison, is being considered for various conservation projects, such as in the West Blean Woods, as reported by Countryfile, the Guardian and others https://www.kentwildlifetrust.org.uk/wilderblean. Coming across large animals such as bison roaming the countryside is exciting and they can create rich new wildlife conditions; but some of the statements made seem to me debatable.

The Wilder Blean website states that European bison are the closest living relative to one ”which used to roam the UK several thousand years ago”. The Guardian picks this up, stating that the steppe bison is thought to have roamed the UK until about 6,000 years ago https://www.theguardian.com/environment/2020/jul/10/wild-bison-to-return-to-uk-kent. Except there is (to my knowledge) no firm evidence to support claims that bison were part of our fauna in the last 11,000 years, just speculation and perhaps a bit of wishful thinking! 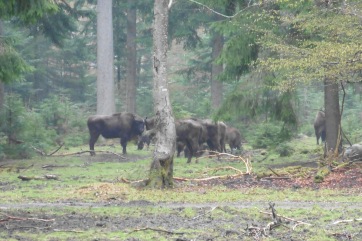 European bison; a bison browse line in an aspen stand in central Europe.

Bison were in Britain during the Pleistocene era and are represented in cave art at Cresswell Crags dated to about 13,000 years ago (Stuart, 1995; Ripoll et al., 2004; Pike et al., 2005). There are bone remains from about this time from Doggerland. However, the late Derek Yalden in his history of British mammals did not think that bison returned to Britain, or if they did that they did not survive long, in the Holocene  (the last 11,000 years or so) (Yalden, 1999, 2003). Moreover the general scarcity of bison remains in western Europe through the early Holocene, compared to a relative abundance of bison remains in central and eastern Europe, suggests that the apparent absence from Britain was part of a wider pattern of retreat from the Atlantic fringe (Benecke, 2005; Kuemmerle et al., 2012). 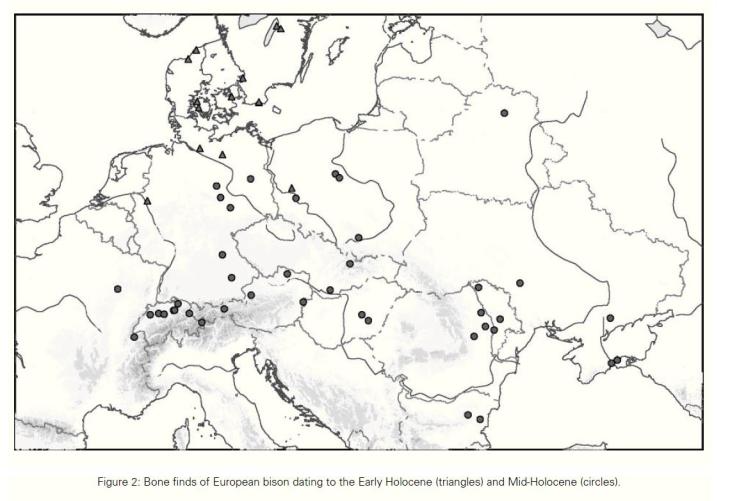 Bison are described as a missing keystone species for British woodland https://www.kentwildlifetrust.org.uk/wilderblean. If there were some bison present in Britain at the start of the Holocene, they were unlikely to have been a significant part of the ‘wildwood’  in Britain– the tree cover that developed to a maximum cover around about 6-8,000 yrs ago. Bison and even the wild ox, which might have lasted until about 3000 years ago, had long gone by the time ancient woods and wood-pastures emerged as distinct entities in the landscape in the early medieval period.

The woodland assemblages that we value, whose decline over the last couple of hundred years we lament, are those that survived in the absence of bison and aurochs. The Blean in particular has a well-documented history as predominantly coppice woodland apart from the replantings in the 19th and 20th centuries. It is notable for the lack of a large herbivore component, including even deer, from the medieval period until the late twentieth century (Holmes & Wheaten 2002). 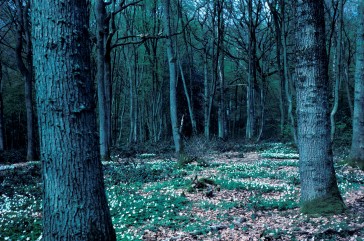 Historical declines of flowers such as wood anemones or butterflies such as the heath fritillary in ancient woods are not connected to the presence or absence of bison.

Absence of evidence for bison is not evidence of its absence and the situation could change. Bison bones can be difficult to separate from those of wild ox. Future discoveries could prove bison to have been present in the mid-Holocene in Britain, rather as recent work is suggesting that Scots pine might, after all, have survived in Ireland through to the present at one or two sites (Roche et al., 2018). However absence of evidence is an even poorer basis for the introduction of a species, particularly if it is being implied that it is a re-introduction.

In fact the bison are really being brought in as an alternative to mechanical management: they are expected to break up the rather uniform twentieth century plantations in West Blean, creating more open space and a more varied woodland structure. What will result is not however restoration of ancient woodland as it has existed in historic times; many ancient woodland plants do not grow well and flower freely in grazed situations.

Instead thee will be the creation of a new type of landscape for this part of the Blean. We cannot predict how much tree cover will be left or whether the introduced conifers will be browsed more by the bison than the remnant broadleaves. It is predicted that a partially tree-ed habitat mosaic will emerge, within which species such turtle doves and nightingales might do well as they have on the Knepp Estate; but will that be 20% or 80% openness?

An important species in the Blean is the heath fritillary butterfly whose food plant, common cowwheat thrived in recently cut coppice. More open conditions will benefit cowwheat and its seeds can be dispersed by cattle (Chlumský et al. 2013), but are grazed patches of cowwheat suitable for the fritillary – I don’t know. We should find out from the monitoring programme that is part of the Wilder Blean project, although I think it will take 5-10 years to be sure that what emerges will be a desirable and sustainable form of landscape management. 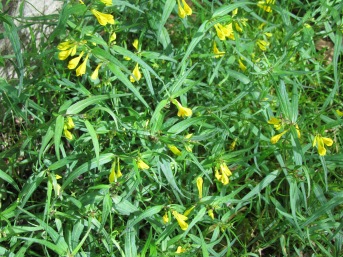 A pine stand in West Blean of the sort that might be broken up by bison to encourage the cow-wheat, food-plant of the Heath Fritillary butterfly.

We do need to rethink how we do conservation in Britain and explore new ways of managing areas for wildlife. However we should try not to present possibilities and speculation as fact, and be honest about the uncertainties. We should also try to be consistent: some 6-8,000 years ago Scots pine was widespread as part of the tree cover of England; if bison are to be encouraged as a ‘formerly-native’ species, should Scots pine also be added to our conservation palette?

HOLMES, W. & WHEATEN, A. (eds) 2002. The Blean: the woodlands of a cathedral city. The Blean Research, Group, Canterbury.