Foresters are often accused of just looking up at the trees and ignoring the ground flora around their feet – ‘stepover’ plants. Yet how often do I think about what is going on below the flowers, herbs and ferns that I am recording in my permanent plots, down in the soil?

Being aware of soil differences is particularly important in British woods because conditions can vary a lot within quite short distances. There are woods such as Iken Wood in Suffolk that are on virtually pure, wind-blown, sand and others such as Holme Fen where the soil is 100% organic material, drying-out peat. At Witherslack Wood in Cumbria you can go from free-draining acidic soils with bilberry and  wavy hair-grass, past wet hollows of sedges and sphagnum, on to free-draining limestone with a dog’s mercury and wood false-brome flora – almost the full spectrum of soil pH and soil moisture-regime found in the country as a whole – within the space of about 50 m. 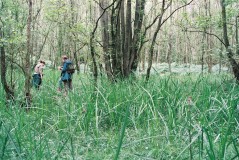 A varied range of soil conditions at Witherslack woods, leading to a diversity of ground flora.

Below the soil surface plants may have specialised roots and stems that spread out, budding-off new individuals that allow the original plant to occupy new ground. Other types of modified stem act as storage organs allowing the plants to survive unfavourable periods, such as summer droughts or winter cold. In an early survey one August in the Duddon Valley I was surprised by large expanses of apparently bare litter alongside some of the streams; only when I dug down and smelt some small bulbs did I realise that these areas were in spring just solid wild garlic. In some species these below-ground structures can survive for several years without producing aerial leaves and shoots. 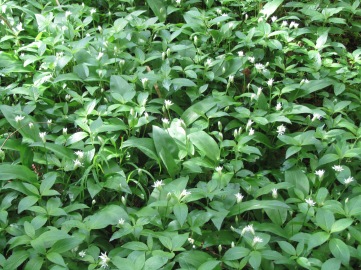 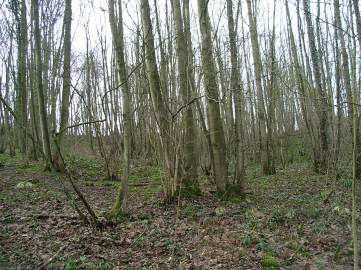 Now you smell it, now you don’t: areas of solid wild garlic in spring can be just bare litter in late summer.

Seeds also get buried in the soil and provide a way for plants to re-colonise areas after periods when they may have been absent above-ground. The ancient Greek writer Theophrastus, sometimes called the father of botany, noted that new plants appeared when soil was disturbed. However usually what comes up is a very different mix to the species that are growing above-ground (Brown and Warr, 1992). In one study less than 40% of the seedlings grown from the soil under neglected coppices in East Anglia were of species found in the surface vegetation. Many species typical of the shaded conditions in woods such as wild garlic, wood anemone, enchanter’s-nightshade, bluebell, sanicle and dog’s mercury, are rarely found in the buried seed bank. Either they do not produce much seed because their flowering is suppressed under shade, or else their seed does not survive for long in the soil. There may be small amounts of some specialist species such as wood-sedge, hairy wood-rush and yellow pimpernel, but the buried flora largely consists of the more light-demanding non-woodland species and woodland generalists such as soft rush and bramble.

Species of the soil seed-bank: soft rush and wood-spurge.

Some rare species such as Tintern spurge may rely on buried seed to tide them over difficult shady periods. Tintern spurge had been recorded from a South Wales wood, Coed Wen, but had declined there in the post-World War 2 period. When coppicing was resumed at the site in the 1980s, the plant re-appeared in abundance (Marren, 1999). Its seeds had been buried, lying dormant, until the soil disturbance and increased light brought them to the surface and encouraged their growth. Its   more-common relative the wood spurge behaves similarly.

Some fungal threads (hyphae) invade the roots of plants to form what are called mycorrhizae – plant-fungus interactions. The host plant (usually) acts as a source of carbon compounds, derived from photosynthesis, for the fungus, but the host benefits from increased availability of water and nutrients such as phosphate absorbed initially by the fungal hyphae system. It had long been recognised that most trees have mycorrhizal roots. On species such as oak the fungus forms a distinct sheath around the fine roots, from which the hyphae then spread out through the forest floor, connecting with other trees. More recent research has shown that under natural conditions most woodland ground flora plants have mycorrhizae as well (Harley and Harley, 1987).  The links are not as obvious as with the fungal sheaths on many tree roots, because the fungus grows into the roots and forms structures within the host-plant cells themselves.

The movements between the components of the system are more than just ‘sugars from the plant to fungus, water and mineral nutrients from the fungus to plant. Some of the sugars moving into the fungus from one plant may end up in other plants connected via the fungal hyphae, meaning that there is a transfer of energy from one plant, possibly one species to another (Wohlleben, 2016) The dynamics of the relationship between the fungus and the host-plant can change over time. If the host-plant is weakened the fungus may end up killing the host, but the so-called host can be the freeloader as well. The early growth of most orchids relies on carbon from the fungus as well as mineral nutrients, because the dust-like seeds of orchids contain too few reserves to grow a stem and leaves on their own.  For several years the orchid is in effect a parasite on the fungus.  The fungus in turn draws on carbon from its connections to adjacent trees, so a three-way relationship is formed. The yellow bird’s-nest, related to the heather family, has given up on direct photosynthesis altogether. 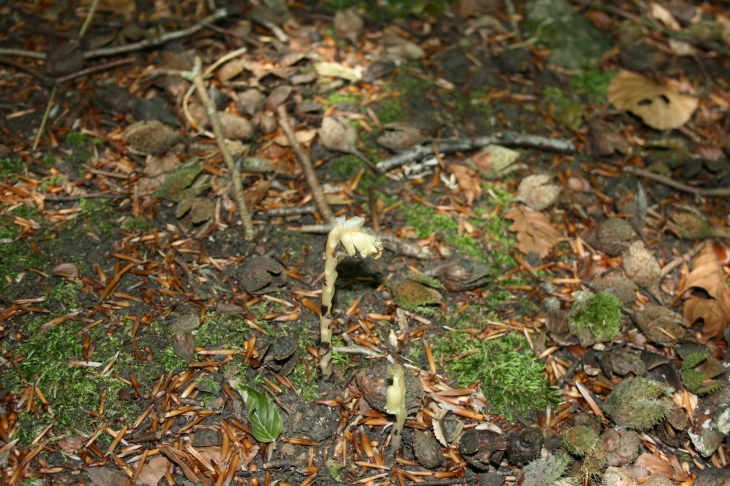 Yellow Birds-nest, a freeloader on a fungus and its tree host.

If the fungal partner is adversely affected by a change in environmental conditions, this could have knock-on effects for the host-plant’s growth. Fungi are more sensitive than most vascular plants to increases in heavy metals and nitrogen deposition to British woodland soils from air pollution and so some of the pollution impacts that we see may be indirect responses to the disruption of these below-ground relationships.

So, next time you are walking in a wood, spare a thought for what is going on beneath your feet.

WOHLLEBEN, P. 2016. The hidden life of trees: What they feel, how they communicate—Discoveries from a secret world, Greystone Books.