The title is modified from a quote used in the public health sector. It reflects the problems of trying to adopt evidence-based approaches to in this case conservation management. If asked what we really know about the effects our woodland management is likely to have on the species found in a site, the honest answer is usually not a lot!

Ok, we thinned out the conifers, now what is going to come in?

There are direct observations of the impacts of different operations on some groups of species, but the vast majority of species (especially those below ground or up in the canopy) have never been looked at all. Where species-management effects have been studied experimentally this has often been only at one or two sites, or over a short time (less than a decade). At Wytham Woods, which is one of the most studied patches of forest in the world, there is little direct evidence on the consequences of most of our interventions (including leaving areas alone). However we are not unique in this respect. Across the conservation sector generally, in Britain and abroad, there is a similar mismatch. Various studies have shown that managers draw heavily on their own, their predecessors, or colleagues experience for the evidence on which to make decisions. 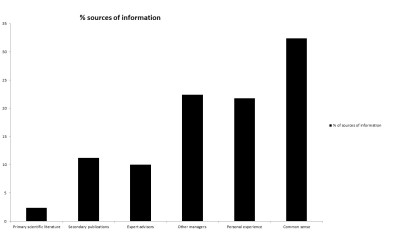 Some management questions lend themselves to the classical experimental approach – a single intervention is applied to a reasonably uniform habitat and there are clearly defined desired outcomes. Two initiatives have sought to bring together such studies from across the literature, grading them as evidence according to the nature of the study, see http://www.conservationevidence.com/ and http://www.cebc.bangor.ac.uk/ .

However, conservation management questions are often not that amenable to this sort of approach. They are ‘wicked’ problems in that the best answer at a particular place and time may be contingent on a range of other variables, including the site history. So I, as a manager might be interested to know that coppice generally benefits the ground flora richness, but what I really need to know is whether my site will be amongst the minority of cases where the flora does not respond. That information is more likely to come from talking to local practitioners who have experience of coppicing on similar sites, than from experimental coppice studies, because in experiments the aim is to control as many of the extraneous variables as possible.

Other factors act to make the scientific literature less helpful to conservation practice than might be hoped. Researchers and academic journals value scientific rigour and novelty in the approach used or results. You are unlikely to get published in a top-flight journal for showing that a particular management practice that has already been shown to produce a result, has the same effect in eight out of ten other sites – that is not new. However, for the manager knowing whether the results are repeatable across a range of sites is critical. Managers must also consider the costs of activities: a technique that works in 70% of cases may be more likely to be taken up than one that gives 95% certainty, if the latter is much more expensive.

Ecologists going to work elsewhere in the world have been criticised for not considering traditional knowledge when promoting conservation strategies (Newing, 2009; Parrotta et al., 2016). Is there an element of the same arrogance in attitudes to decisions based on experience or traditional practice in the UK? There are two authors whose writings will have been read by most British woodland practitioners, often with thumbed copies on their desks– Oliver Rackham and George Peterken.  Neither are noted for the their experimental studies of woodland management.

‘You want to know about coppice, ask these guys’.