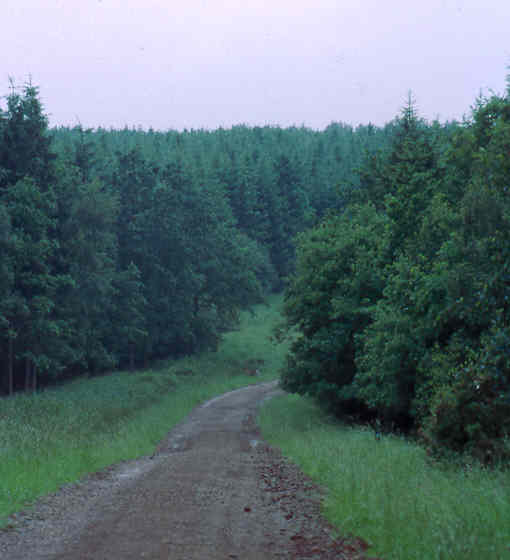 The Second World War, as had the First, highlighted Britain’s dangerous dependence on imports of food and wood, making us vulnerable to naval blockades. There had been heavy felling to meet the war effort – depending on the source between a third and half of woods had some felling in them, and in places whole woods were described as devastated in the surveys carried out for the 1947 census (HMSO 1952).

An illustration from the 1947 census report.

So, after the war there was a push to increase food from our own resources, leading to massive increases in farm productivity and intensification. There was a parallel push to increase home-grown timber production. This was partly to be met by large scale afforestation of open land particularly in upland Britain, but also through increasing production from the existing broadleaved resource. Much of this was classed as unproductive scrub according to the forestry views of the time – not what was wanted when there was such a greater demand (as there still is) for softwoods -larch, pine, spruces and firs.

An example of upland planting.
Understandably therefore, when in 1942 the Forestry Department was put in charge of managing Wytham Woods, which had recently come to the University of Oxford, their aim was to show students and others what modern forestry was all about. In the 1950s the then largely open Radbrook Common was planted up; and areas where the woods had been felled during the war were planted tidied up and replanted. 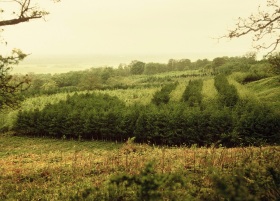 The planting up of Radbrook Common

At Wytham, as elsewhere, the common practice was to plant conifers either as pure stands or as nurse crops with broadleaves. Typically 3-5 rows of (say) Norway spruce might be put in with 2-3 rows of oak, the idea being that the spruce would be thinned out over the first 50years leaving a final crop of oak to go on for another 50-100 years. In existing woods a belt a chain wide (roughly 20m) of broadleaves might be left round the edge of the stand to hide the young mixed growth within. These sometimes still survive, as at Forestry Commission sites at Salcey Forest in Northamptonshire and Orlestone Forest in Kent.

The initial felling was not necessarily a problem for the flora; many if not most of these woods had been managed as coppice in the past and so periods of large scale opening up of the canopy were not unprecedented. Indeed given that coppicing had been in decline in the first half of the 20th century this burst of activity in the woods may have given species that depended on open conditions an unexpected chance to flourish on a grand scale. Subsequent changes were less favourable for them. On the whole the ground vegetation became sparse or almost non-existent. Some well-tended stands might be opening up by thinning but this was not as great as in a coppice; in less successful plantations survival of ground flora depended on some broadleaved trees surviving either planted or relicts from the previous stand or in the patches that had not been planted. 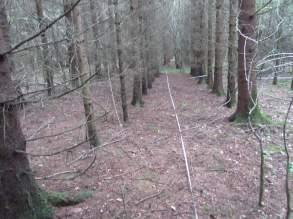 Not a lot of plants to record!
The change in forest policy in 1985 (Forestry Commission 1985) largely halted further conifer planting on ancient woodland sites and opened the door for recovery of the flora through restoration of native broadleaved cover. A further boost was given to restoration in the early 1990s with the UK Biodiversity Action Plans which promoted this as a target at least for some priority woodland types. An early restoration scheme was at Dalavich Wood, Lochaweside (Kirby and May 1989); it is now difficult to tell which areas were under plantations in the early 80s and which not. In Salcey Forest stands from which the spruce nurse have been removed have similar richness to the mature oak stands that survived from the 1850s (Kirby et al. 2017). 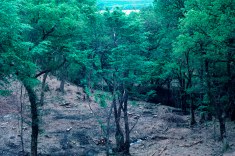 What vegetation survives under the stand is part of the key to success – obviously the more the better. However even in a coppice wood only some of the floral regrowth depends on surviving plants. Much comes from the buried seed which will be stimulated by felling activity or spreads back in from edges and other stands. There will be a burst of competitive plants in the felled areas, but provided that there is fairly rapid re-establishment of a dense broadleaved canopy (be it birch, thorns, hazel) their growth will then be knocked back. The abundance of bramble thickets in many plantations may in this context not be a bad thing, because they replace the shrub layer which is often missing in even restored plantations. 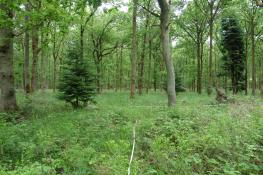 At Wytham, the replanting with conifer mixtures was stopped in the early 1960s when the University decided that ecological research should take priority over forest production teaching (Kirby 2016). Over the last few decades the conifer component has been gradually reduced by thinning and here too, the flora is spreading back.