I recently went back to the corner of Essex where I grew up, a roughly 30 x 30 km square defined by Epping in the top left corner and Orsett in the bottom right. Forty-five years on I see it in a different light.

We regularly visited Hainault Forest on the way to see dad’s family and it was also not far from the village school.  I did not realise at the time though, that it is just a fraction of the size it was in the early 19th century.  An enclosure act meant that much of it was cleared in 1851. 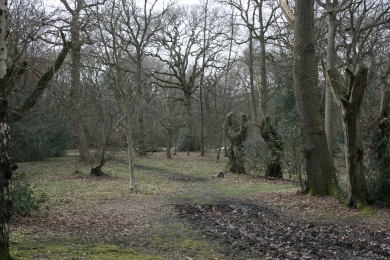 Perhaps some good came from this however, in that when similar enclosure and clearance was proposed for Epping Forest a few years later it was vigorously and successfully opposed and Queen Victoria celebrated that as the ‘People’s Forest’.  The Epping Forest Act of 1878 is one of the early markers for the modern conservation movement (https://www.cityoflondon.gov.uk/things-to-do/green-spaces/epping-forest/heritage/Pages/history-of-Epping-Forest.aspx).

Clearance of other ancient woods continued through the twentieth century. Most of Ongar Park Wood – which Oliver Rackham thought was probably the same area referred to in an Anglo-Saxon record of 1045 ‘great park of Aungre’ – was cleared about 1945. Part remains as overstood hornbeam coppice, but the rest is now arable fields either side of the line of Roman road. 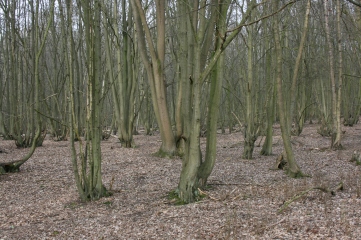 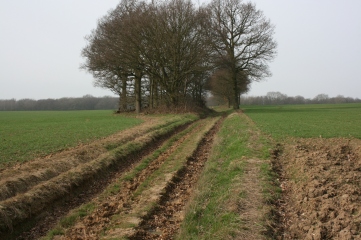 A favourite walk as a teenager was across the fields to Navestock and beyond. The path went through what is shown on Andre and Chapman’s 1777 map of Essex as Navestock Park, bounded by small woods. There is not much evidence of parkland now and some of the woodland was felled and replanted with pines around the late sixties, but the bluebells were pushing through in the unfelled edge.

However as well as dwelling on the changes to ancient woodland in the area I also visited a new wood that I had a small part in getting established: I helped my maths master weed the plantation he had made of Christmas trees interspersed with mixed pines and broadleaves intended as a long-term crop. It is now a maturing wood, with a flora including primroses, bluebell, pendulous sedge, as well as the inevitable nettles and bramble. 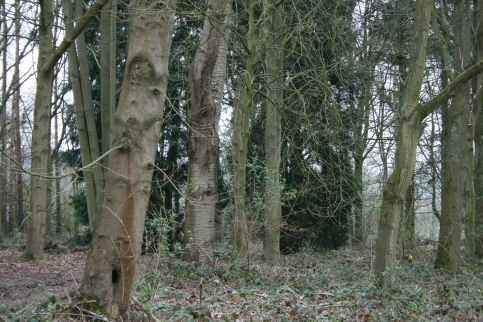 Some of these plants may have spread in from the hedge around the plantation or the remnants of an old orchard on the site.  Unfortunately not all new woods are close enough to such a source of diversity. Much of Thames Chase Community Forest, north of Grays, is on the Thames flood plain, which has very little ancient woodland and not that many old hedges. The woodland is a welcome break from the oilseed rape and cereals around, but is pretty bare below, apart from the odd plant of cuckoo pint.

So, accepting that it might take decades for typical woodland plants to colonise, should we introducing suitable ground flora plants once the trees have established?  It would not be so different from the planting of wild flower strips along the margins of fields. The countryside is not nearly as rich as it was when I was an Essex lad; the conservation sector has managed to slow the rates of decline in many places, but I think we are going to need more radical actions if we are to reverse that decline.

I will try to put something up about once a month about British woodland. Hopefully some of it may be of interest. The Old Man.
%d bloggers like this: